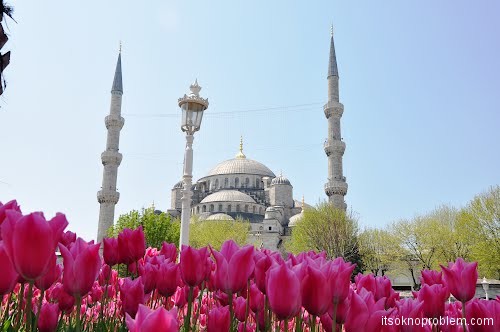 This festival, festival of colors, known worldwide. It is held annually in the spring, during the month, during flowering tulips. A huge number of flowers planted around the city. Tulip bulbs give out to everyone, who wants to help in the design of the city. Flowers can be seen everywhere: parks, squares, ALLEY, in the yard and even avtomagistralяh.

More 100 species tulips fill the city each spring, the set of colors – синий, желтый, red, purple, white, pink and many other, turn the town into the realm of colors.

The main activities of the festival are held in the park Emirgan (Emirgan Park), will be planted where the most beautiful and large tulips. Top Turkish landscape designers will surprise residents and visitors with its unusual, colorful compositions of different varieties of tulips.

The streets of the city will be decorated with painted sculptures of tulips, made by local craftsmen. In the central square sets the scene, also decorated with tulips, where for several days of celebration will be concerts featuring popular musicians and singers.

It is worth visiting the exhibition of different varieties of tulips, paintings and panels of flowers, flower show in city parks, Fair, where you can buy the rarest varieties of bulbs and everything necessary for their cultivation. Besides the tourists and the festival will bring together professional growers and breeders.

The first festival was held in 2005 year. 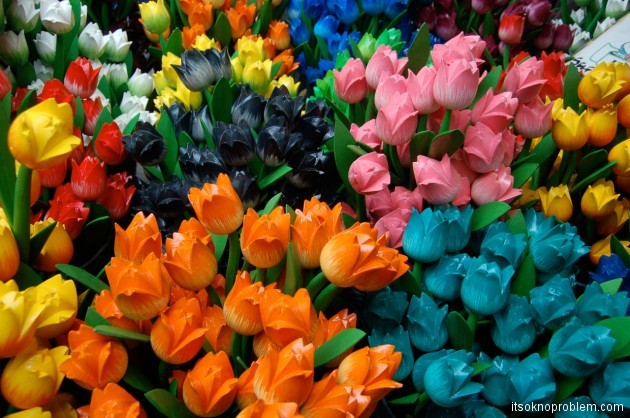 The first data about tulips were found in ancient Persian literature.

In Persia wore this flower name "dyulbash"- Turkish turban, from which subsequently occurred word "Turban"And the Russian name of the flower -"Tulip». He was praised by many Persian poets, and especially the famous Hafiz.

But most of all loved this flower Turks, his wife divorced him in abundance in the Seraglio, where many of them, maybe, he even resembled their childhood, home, lost freedom.

In yellow tulip bud the happiness has been concluded, but no one could reach him, as bud undisclosed, but once a yellow flower in the hands of a little boy and took the tulip itself revealed. Baby shower, carefree happiness and laughter opened bud!

According Turks, in tulip, as a beautiful woman, seeing once, fall in love forever!

For legal work in a Chinese company, you will need a working residence permit. If you send a job to a foreign firm (Russian, eg), it will suffice to business (etc.. commercial, Business) visa.

What visa do I need to work in China?

Cardinal, breakthrough changes, inventions of high levels are usually beyond our perception. And how limited is it, can be illustrated with a small example. During the war, A team of engineers worked to improve aircraft, to gain superiority over the enemy. “Watching, which parts of the aircraft are most susceptible to damage, need to strengthen them in these places”. Engineers collect data about, what goes wrong, …

How much are the coats in China?

Bali are usually sold in a supermarket mushrooms and magic mushrooms in specialized stores. So-called, magic mushrooms – it psilocybin mushrooms psychedelic effect. In many countries they belong to the category of illicit trafficking of psychotropic drugs. In Indonesia, the ban on their distribution is no.

What kind of mushrooms in Bali?

Evolution, from which not to get out, only technology can now, which will allow all people to get more good. This is much better, than swell millions of dollars in advertising, election campaigns, to prepare the Revolution, to overthrow the existing system, which may and will change, but the world hasn’t reached the cardinal changes yet.

How many people live in China?

The hotel is really stylish, looks like everything is gorgeous, to finish properly allocated funds. Foyer cool, but the staff at English, of course, not talking, Manager rescued. The location is very convenient – on the street in the business quarter, West Railway Station to five minutes by taxi, very close. In the presence of a restaurant, though the Internet is not checked there.

Where to stay in Baoding? - Xiangjiang (HK) Fashion Hotel

Judging by the name of the airline, flights must be performed, least, between all the hero-city Russia, Ukraine and Belarus: can not forget about St. Petersburg (Leningrad), Odessa, Киев, Novorossiysk.

In Stalingrad already started selling tickets, the company is preparing to make its first flight in early December. In Tula, Murmansk, Smolensk, Minsk and Brest also lives a large percentage of the population, which are necessary budget flight options in Moscow and other Russian cities.

Diary in a few strokes