Annually, in Chinese Weifang city hosts an international kite festival. Competition, which will take place this year, will be the 31 th in a row.

Weifang City, Shandong Province, considered the capital of kites. There is also a museum of kites and kiting international federation, which is the organizer of the international festival. The nineteenth of April the opening ceremony of the festival and for a few days, from 19 th to 21 th of, commands 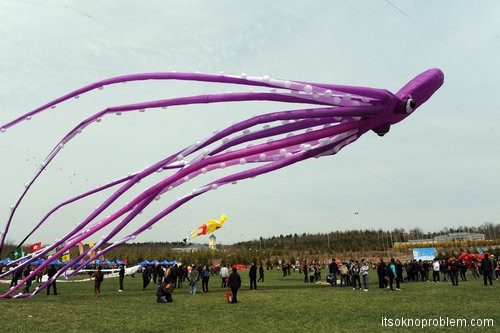 from different countries will demonstrate their skills in dealing with snakes.

And of course, dozens of colorful kites expected, which will be evaluated in the traditional disciplines:

At the festival can be seen as the best craftsmen make kites, history of kites in Weifang more than a thousand years.

Official site of the Festival: http://www.weifangkite.com

Normal, roasted coffee, maybe it is worth to 80-100 yuan per 400 грамм, in large supermarkets can also be found in the package 35-50 yuan (250 грамм) in the department of imported goods.

What other products to bring to China?

Hostel Senior Leader Youth Hostel to practice your Chinese infinitely, in the lobby going to dozens of Chinese travelers, staff generously pours coffee mugs. An ideal place for young people: great location near the waterfront; nearby there and rent bikes, To ...

Where to settle in Yangshuo, Гуаньси? Old city

You will have an interview with the employer in China (or another country), and you should not hesitate to ask questions about the work. So: How long is the contract (most schools want to sign annual contracts)? When and how the teacher will be paid a salary? How many days off, по каким дня…

What questions should ask for an interview for a job as a teacher?

Technology has changed a long time ago, but we cannot adapt and realize! That, what used to be unrealistically expensive, now available. We are not aware, that we can be in touch for as long, how much in your hometown. When was the last time you called your parents? We are located, …

Despite the ridiculous to the Russian ear the name, hotel is just wonderful, near metro Bayshichzhou. It has easy access to major attractions, on foot to theme parks: Window to the World (Window of the World) and traditional villages (China Folk Culture Village); On the subway is easily accessible and in the business district of the city. This is a standard business hotel, adequate prices for takog ...

Nice hotel near the subway in Shenzhen? - Jinhui Hotel

Бар House – almost one of the first places, which comes to you at the exit of the subway Coco Park. There's also a lot and sit, many spaces, large wooden benches and tables allow you to stay in a large number of people. People come to talk, drink. we came to a large company. Time, picking a pizza on troih, get a good idea on the price for the Shenzhen and tasty.

Where to eat and meet new people in Shenzhen? - Бар House. Coco Park

What are the provinces assigned to the Russian Consulate General in Guangzhou?

Power Valley International Hotel is located a little away from the center over the Business Street, really feels closer to the outskirts of the city, but a taxi is not a problem. The hotel is great, prices as in any four.

Next to the hotel is a huge area with an outdoor movie theater and food court, where you can collect various small barbeque cheap. This is where you can have a good time with friends. Or get on elektrobayka, either by taxi.

Where to eat shish kebab in Baoding? - food court at the hotel Power Valley International

How much does a taxi in Beijing?